Sunday July 28th, 2013 I attended the Scranton Comic Con in Scranton, PA.  I hate referring to events such as this as a "Con" when in reality it was a show.  It is what it is I suppose.  I will always support local events and of course bargain shop and hunt when the opportunity presents itself.

I was able to meet a couple of local artists who had their portfolios on display for perusal.  I was more than happy to pick up a few prints to help decorate my personality lacking office.  First up is an artist from State College, PA in Jason Lenox who I courage you to check out at http://www.jasonlenox.com

Jason does a nice job combining some horror with some medieval work which will appeal to many audiences. The Medieval Zombie according to Jason's site is slated to appear at some point in Fubar Press (http://fubarpress.com).  To be honest the print located below on the left caught my eye as a flashback to Iron Maidens "Eddie".  Jason seemed like a very approachable guy, very talkative and easy going so I encourage you to say hello if you happen to cross paths. 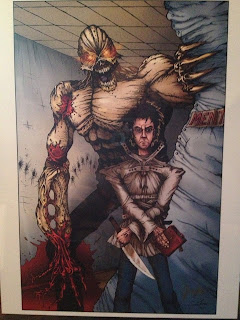 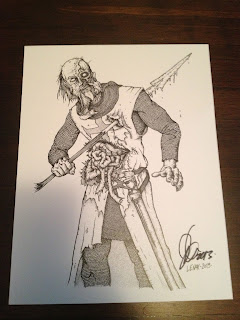 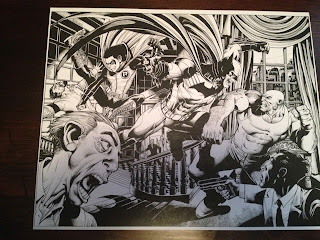 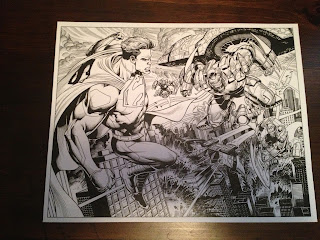 Secondly I got the opportunity to meet Injustice:  Gods Among Us artist Tom Derenick from comic stalwart DC Comics.  Tom was the artist I was most looking forward to meeting in Scranton as I am huge fan of the Injustice series including the video game line as well.

I dont pretend to be a Comic or Comic Art expert, however I like what I like, and Tom's work is what I like.  I enjoy the realism and the well defined lining.  Upon reviewing these, I love finding the detail that often gets lost when these go to print in the actual comics.  Very crisp and emotional whereas the essence of the scene oozes out of the artwork, in short dialogue isn't needed to understand what is happening.  Apparently Tom is in the process of finishing up some upcoming X-Men work and was recently asked to do some digital work for the upcoming 20th Century Fox Planet of the Apes Comic, so good luck to him on that!  I am truly looking forward to what comes out of Toms future work.


For those unfamiliar check out the DC page here: http://www.dccomics.com/comics/injustice-gods-among-us-2013  as well as:  http://marvel.wikia.com/Thomas_Derenick

Posted by Reverend Killtaker at 7:34 AM